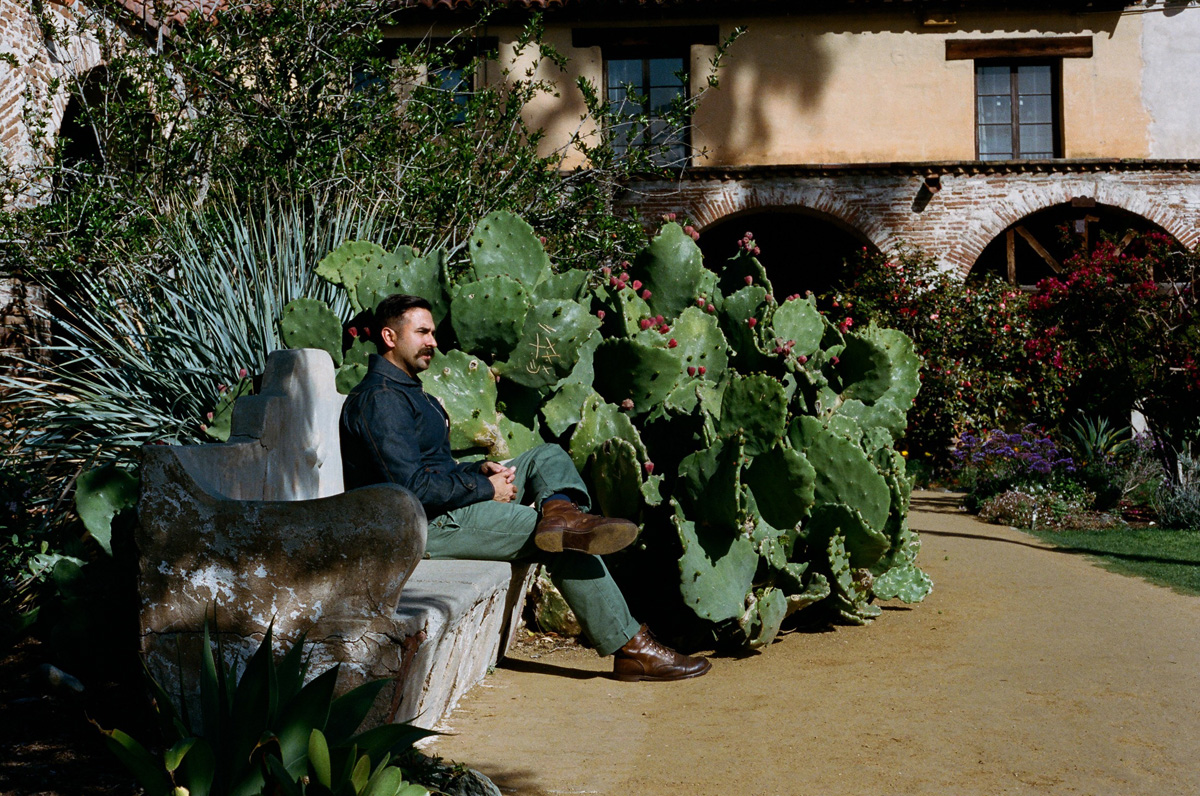 The "Story" page on the Freenote Cloth website has two paragraphs. A quick scan of the first: 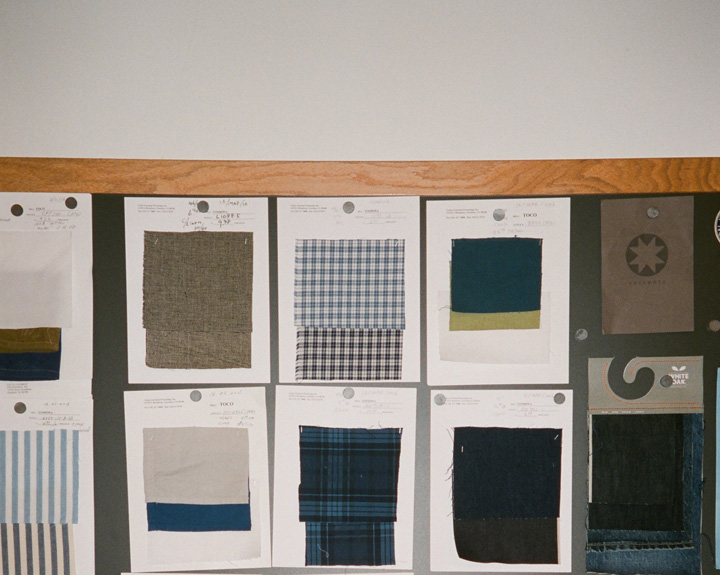 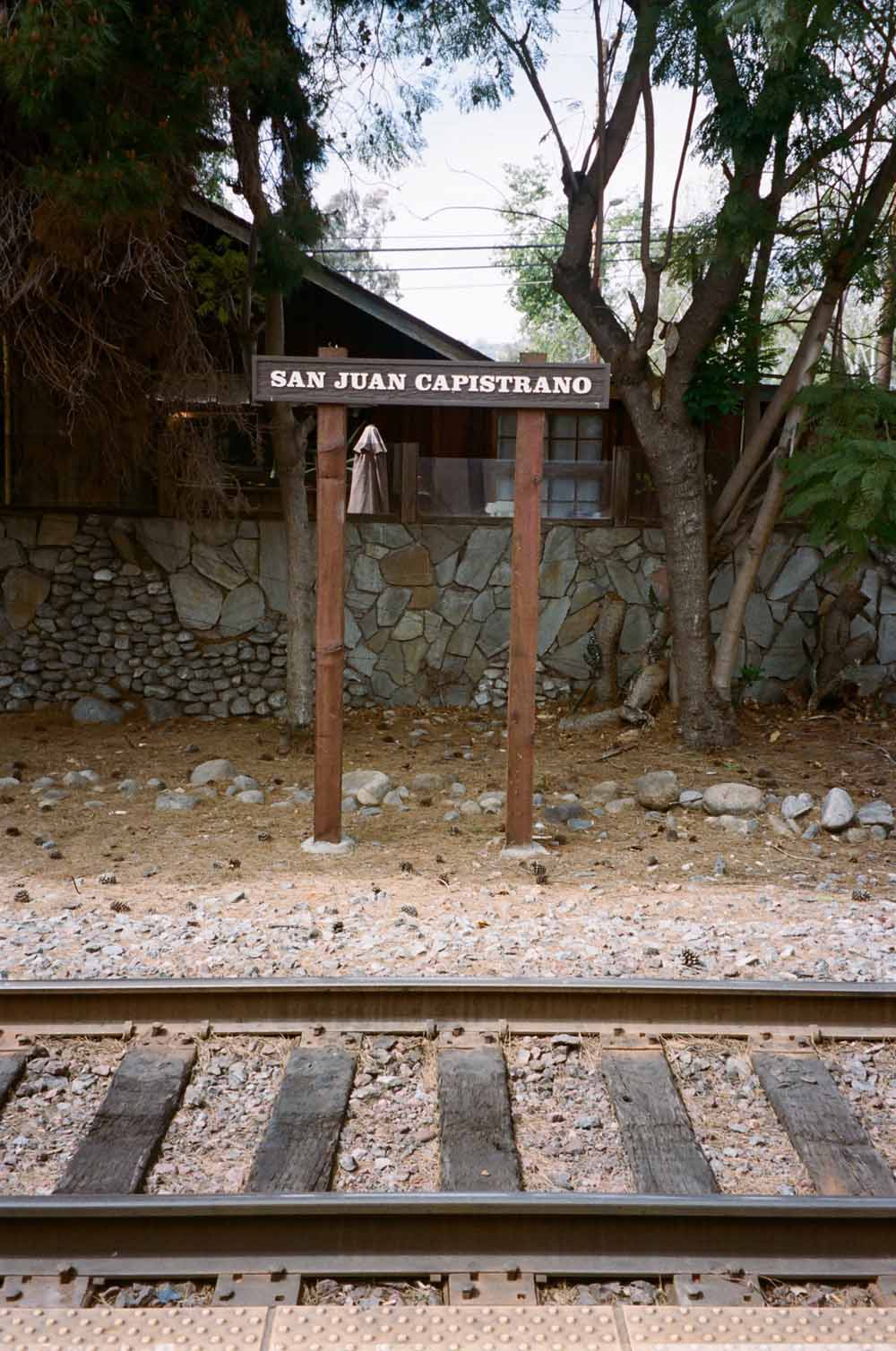 Any American-made menswear company could describe itself with those same terms. And of course, many of them already have. But the second paragraph is something totally different:

Our production is all done up in L.A. We have maybe four different contractors that we work with up there: one in our jackets or outerwear, another one for t-shirts, and then one for our wovens. So we're always driving back and forth. In reality we probably should be set up (in Los Angeles), but we won't. 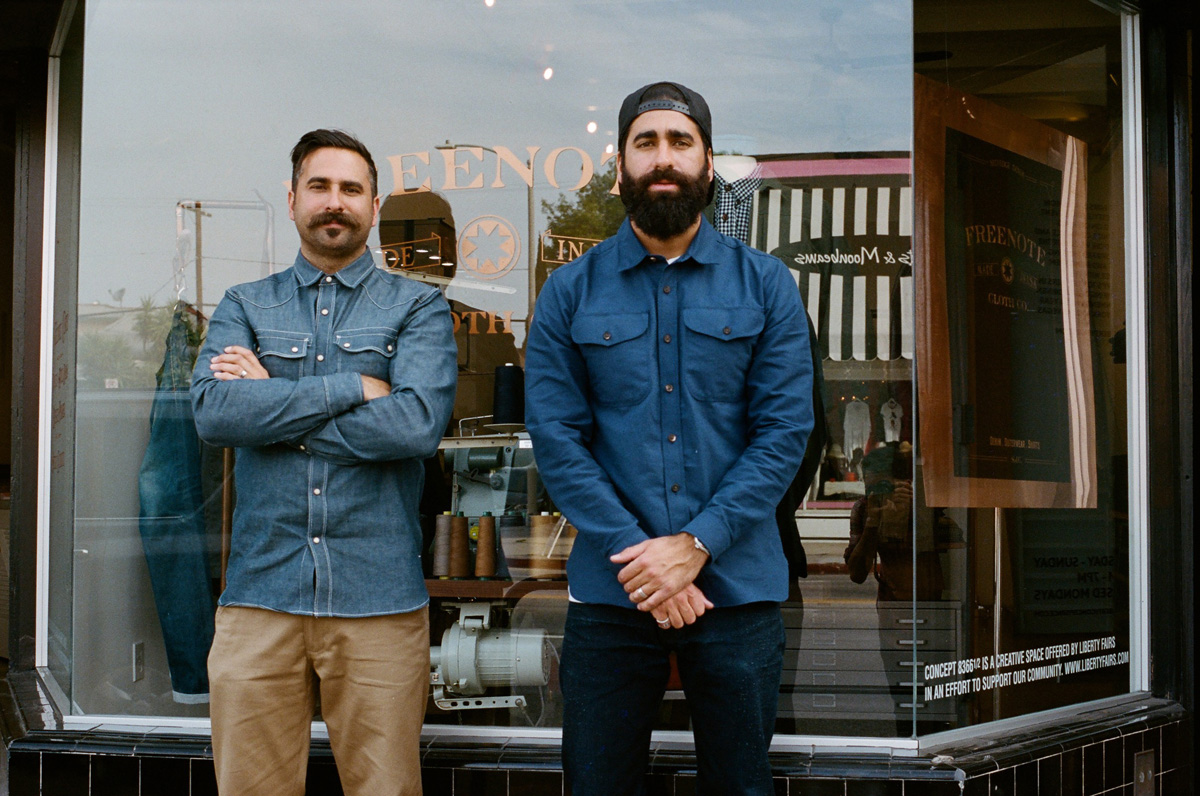 After reading the second "Story" paragraph, those of us at Someone Else started wondering―What if we could flesh out what makes San Juan Capistrano so compelling for Matt and Andrew? If we were successful, all the buzzwords in the first paragraph would become self-evident and substantive, speaking for themselves.

That's the idea we pitched to Andrew via email. In response, he extended an invitation.

The Someone Else team arrived in California on the weekend of Saint Joseph's Day. That's when the swallows, legend tells us, return to Capistrano. 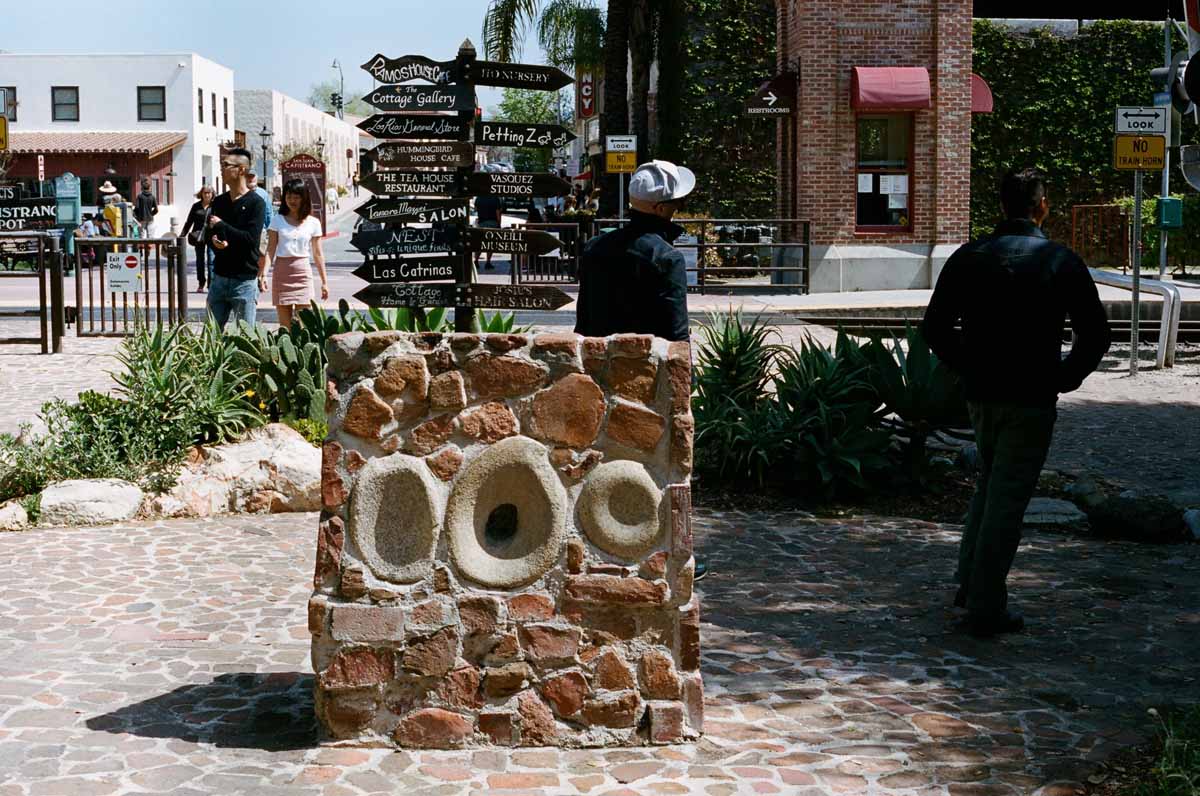 The heart of the Los Rios historic district runs about 1000 feet along Los Rios Street, north to south. The area includes an old bandit hideout; three adobe houses that go back 200-plus years to the original Capistrano settlement; and the spot where one of Capistrano's most famous residents, Modesta Avila, made a legendary social protest. You'll also find a petting zoo, a butterfly sanctuary, restaurants, at least one place to get pour-over coffee, and a gift shop that—for some reason—sells t-shirts featuring Frida Kahlo's portrait.

"This is the longest continually inhabited residential street in California," Matt says as we walk. "They built the mission in 1776 and people who were building it lived on this side of the tracks." Quickly correcting himself, he says, "Well, there weren't tracks back then, but they lived on this side."

Matt stops outside one particular house. "There was a train robber who used to hang out in here," he says. The building now belongs to Matt's friend, who runs the adjacent restaurant. A San Juan law requires Los Rios business owners to live on premises. It's an effort, according to the LA Times, "... to maintain the old-timey and homey quality of an area that has gotten, according to some, over-commercialized." Describing the layout of his friend's bedroom, Matt says, "Underneath the bed there's a trap door. My buddy has his wine cellar down there. It's a little basement where (the bandit) chilled out."

Meanwhile, a man walks past us on Rios Street wearing white socks with flip-flops, pushing a stroller. At the butterfly reserve across the street, a father slings a Thomas the Steam Engine backpack over his shoulder. His small daughter holds a yellow dandelion that a monarch butterfly has settled on. The little girl totters around like an affable drunk at a party, never taking her eyes off the tiger-striped wings that flutter in cool spring air.

Stepping away from the bandit house, Matt looks up and down Los Rios Street. He squints his eyes, concentrating. Finally, he says, "There's a hanging tree around here somewhere." 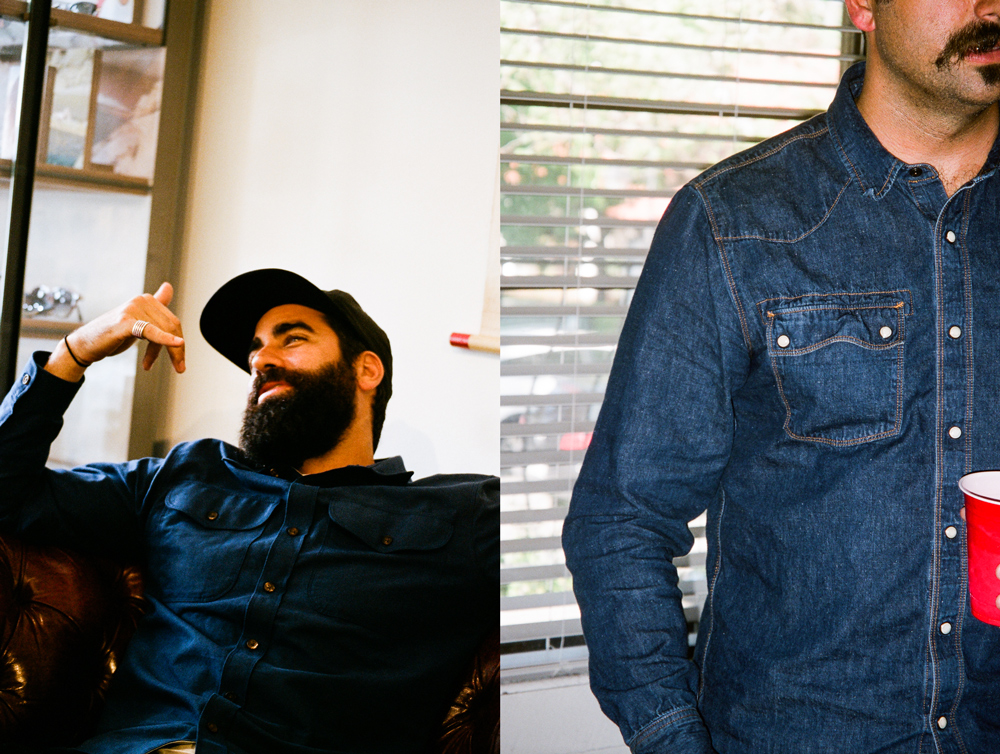 Our office is here, classic Americana. It's more cowboy than it is metropolitan, so we always wanted that in the brand, but gosh, we're not going to run around in cowboy hats and cowboy boots everyday. But you know, you have that kind of extension, that grittiness. 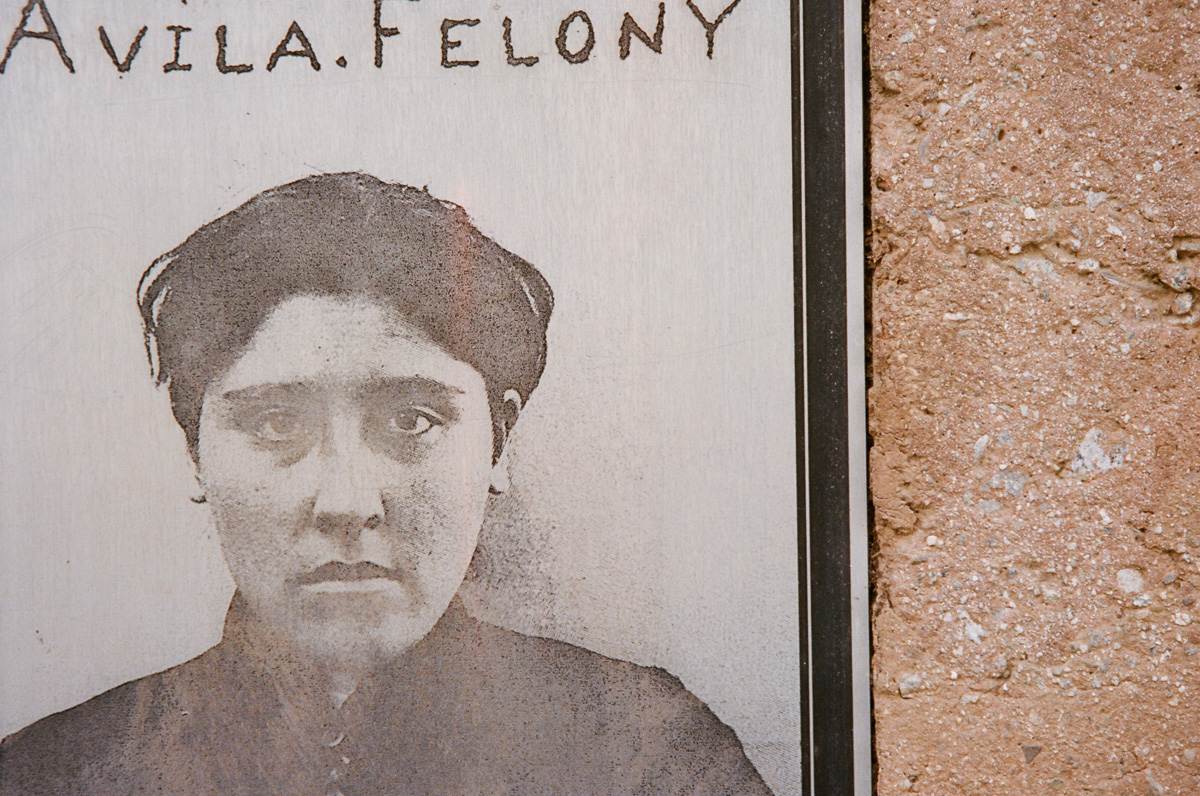 We never find the hanging tree. I even forget to look for the spot where the Santa Fe Railroad cut through Modesta Avila's backyard, steel wheels shrieking against the metal track, steam whistles screaming at all hours, soot pouring from smoke stacks and settling as fine black silt over everything—even the white feathers of Avila's hens, who stopped laying eggs from the stress of it all. In protest, Avila ran her clothesline across the railroad tracks. No one was hurt. Not a single train was delayed. Her protest has been called "a symbolic act" and "an act of pure frustration." Nonetheless, Avila became the first felon in Orange County history. Tried twice and ultimately convicted for Obstruction of a Railroad Track, the judge handed down a three-year bid at San Quentin. (The fact that Avila was single, pregnant, and a prostitute did not help.) She died in jail at age 24.

Matt leads us into a little square where the city proudly display's Avila's mugshot on a plaque. Biographers and journalists have frequently described Avila as a "dark-eyed beauty," which is patronizing but also apt. In her mugshot Avila looks simultaneously compassionate and accusatory. Mugshots are a means for the state to intrude and establish dominance during the intake "processing" of individuals. But here it is Avila who does the scrutinizing—not only of the camera and photographer, but also the invisible, overarching power structures from which all implementations thereof emante. Yet her eyes do not narrow in judgment. They remain wide open, curious. Despite her travails, she has not been corrupted. 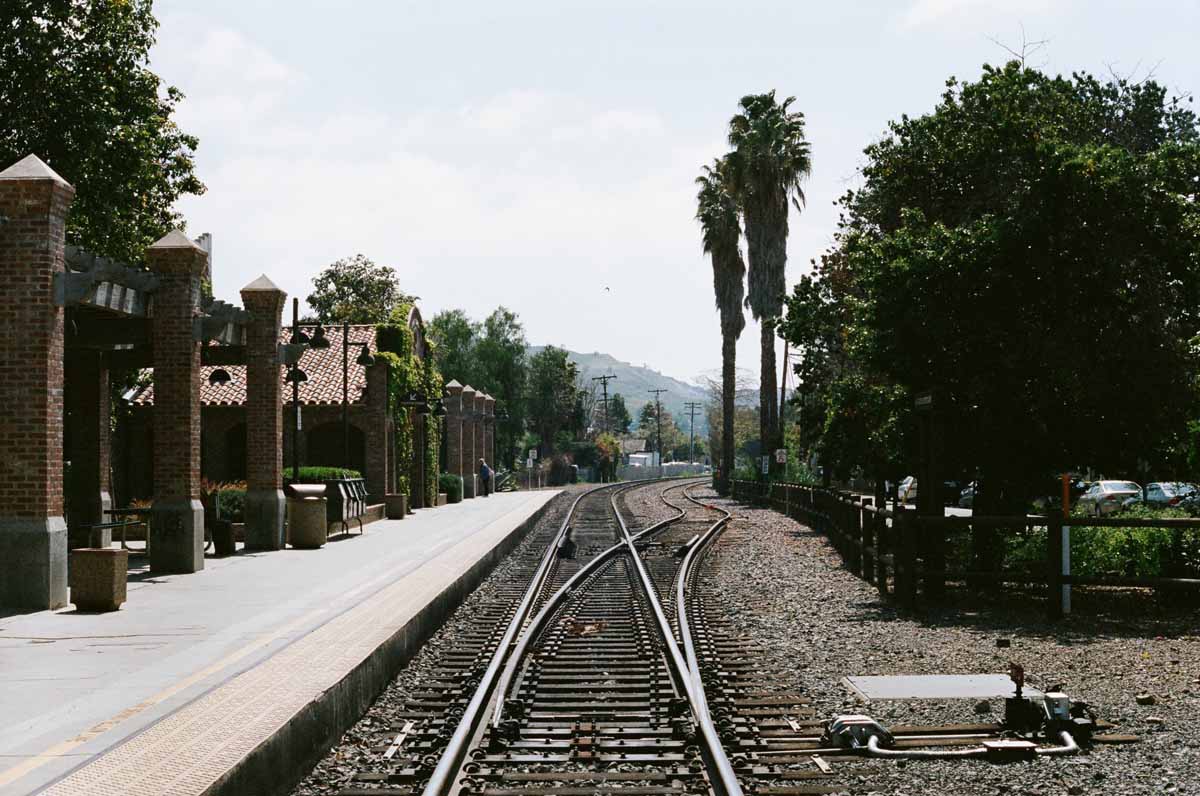 All in all, the mugshot of San Juan Capistrano's number-one folk hero is absolutely capivating. In equal measure I am shocked and grateful that Rage Against the Machine never stuck it in an album liner.

So, tell me again why Frida Kahlo is the one on all the t-shirts at the gift shop? 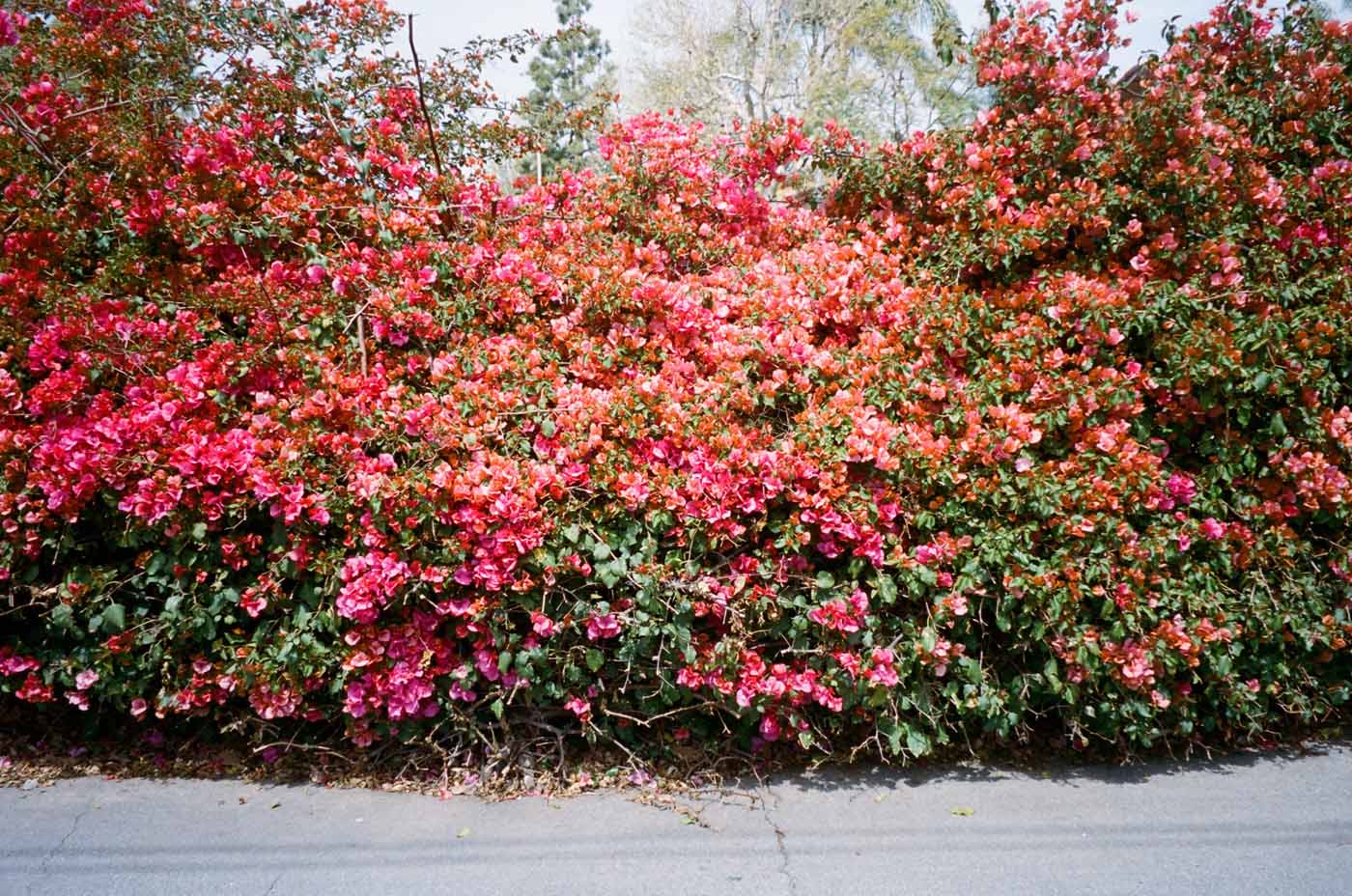 Just walking around Rios Street there, you get one street over and you can get pretty mellow pretty quickly. Some people have been living there for a long, long time, but some people move there because they want to be on that street. There's a house there, you could just tell that the family knew what they were getting themselves into. Just like grooviness: "I'm gonna be jerking around in my lawn a lot, messing around with perrenials. Lots of passersbys; I'm gonna throw out a lot of wassups and peace signs." I know an old surf dog who lives there. He's a surfboard shaper and a rider and a sponsored athlete, a really groovy guy, and he lives in San Juan just to have that lifestyle. 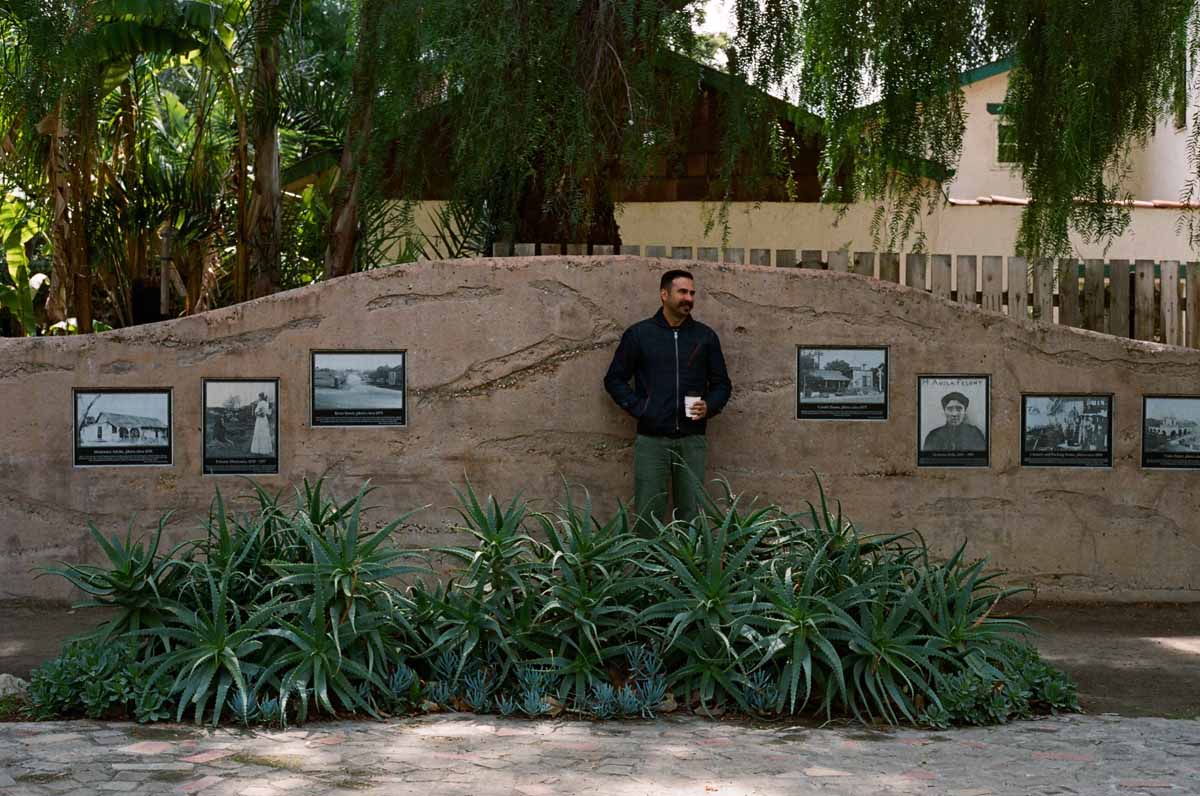 Directly to the right of Avila's mugshot hangs another plaque:

Matt nods while reading the inscription. "I have a denim called the Belford which is like a buckle-back vintage fit," he says. "I forgot about that ... Belford and Company. So you, know we pull names from around the area." The Belford jean is an upcoming addition to the Freenote denim line-up, and (so far), it's the only one that finds inspiration from the Old West in terms of actual construction. The Belford joins a jeans roster that includes the slim-straight Rios, slim-taper Avila, and straight-leg Trabuco. (Trabuco Creek runs west of the Los Rios district.)

So aside from the Belford, the Old West influence of San Juan is more figuative than anything. It's a matter of spirit. Although, when it comes to present-day SoCal, there is one notable, literal inspiration.

So we learned when visiting Trail One. 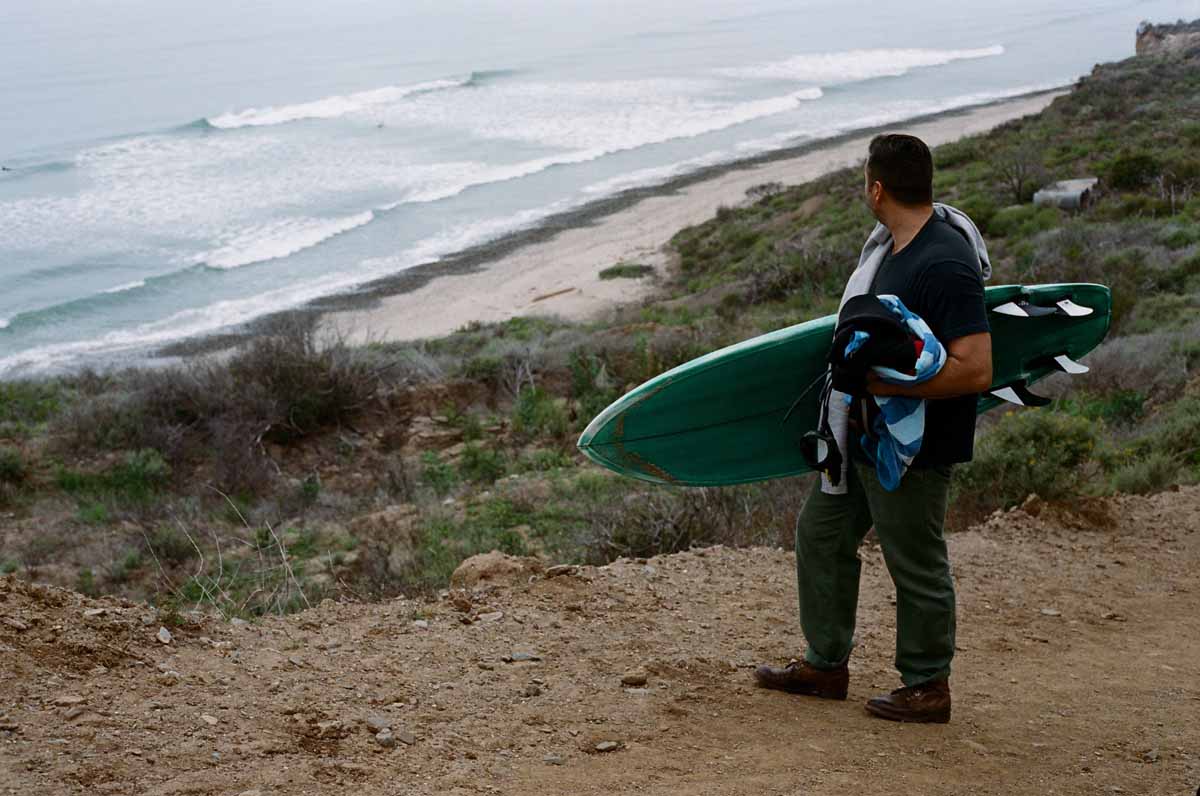 You feel like you're in California a long time ago, before they built everything up.

You and Andrew grew up surfing in Florida. How does the surfing here in California compare?

It's different because here you get more groundswells which are waves coming from hundreds of miles south or north. They kind of form differently. They're longer patterns, where in Florida its more windswells, like constant waves breaking everywhere and it's shorter intervals. 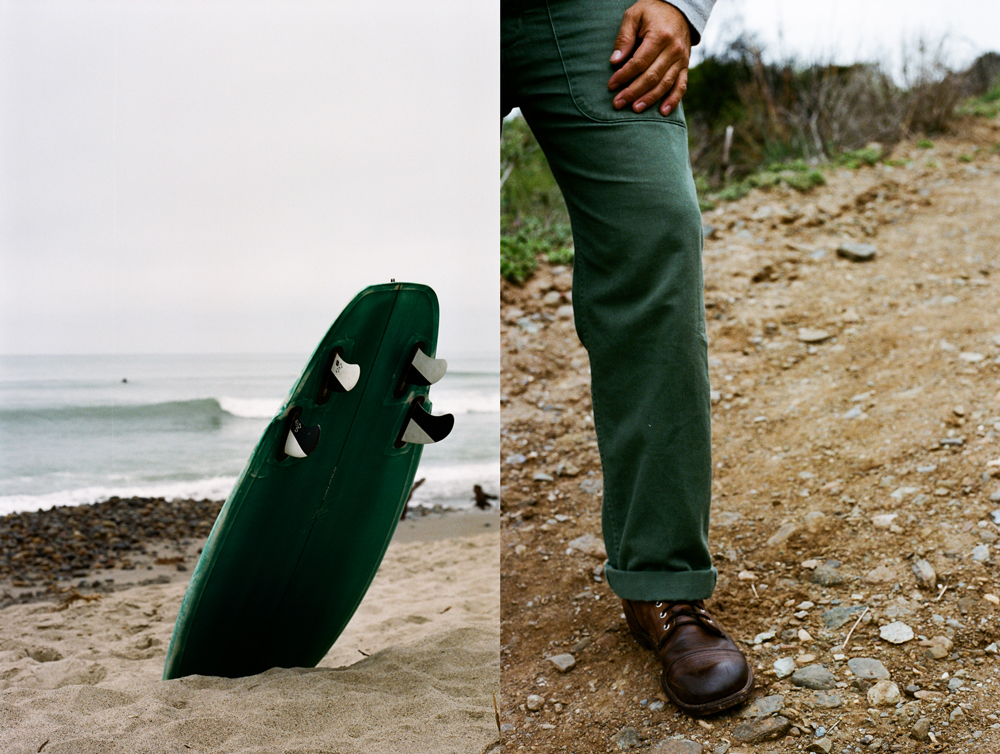 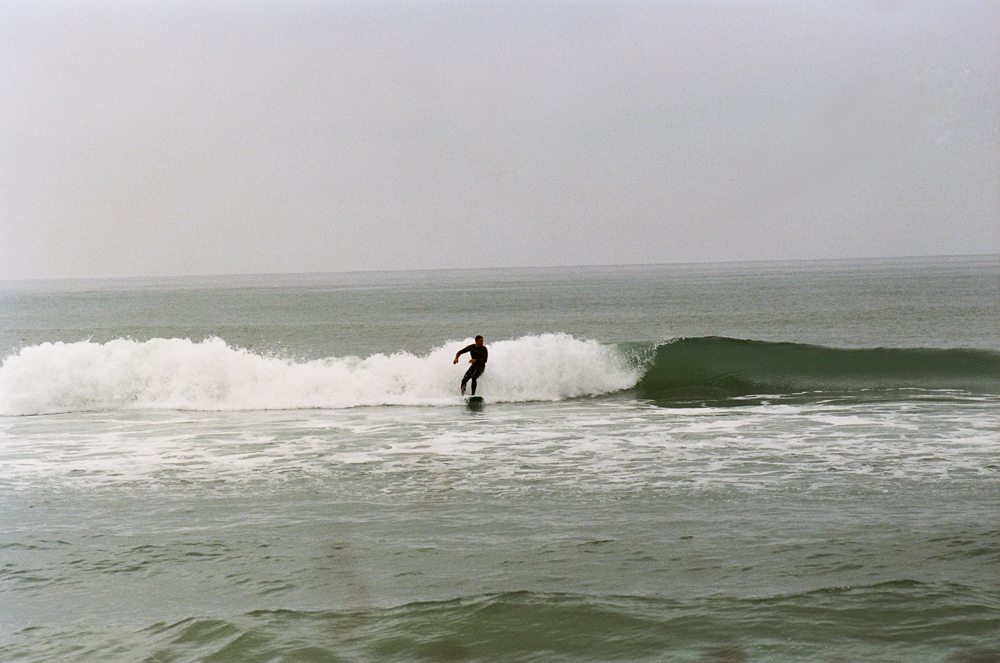 Where are we right now?

We're at Trail One. I think there are six trails here and this is the one just south of the power plant. I think one (of the trails) is like a nudist one. I just like coming down here. It's like ... you feel like you're not quite in California, or you're in California a long time ago, before they built everything up. 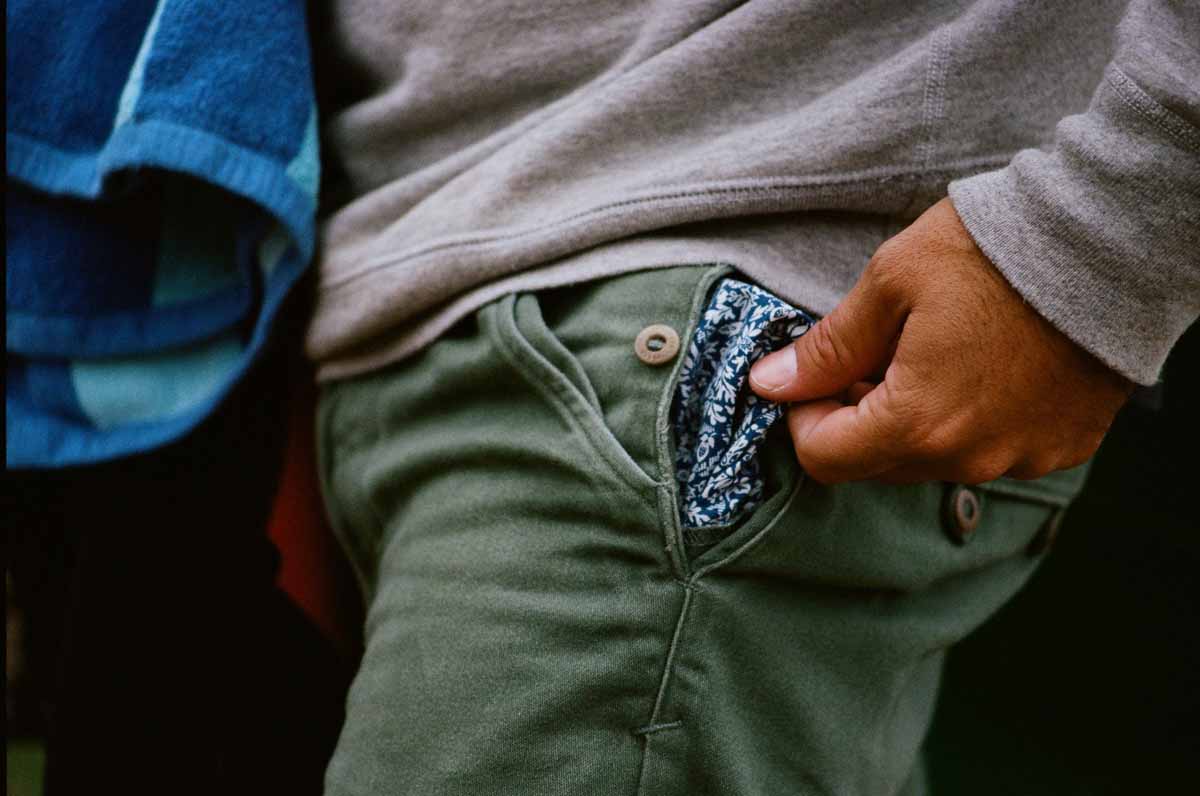 This place means so much to you that you actually named a capsule after it, the Trail One Collection. What are all the pieces in that?

We did a shirt that was an indigo-dyed, floral, Hawaiian style. That fabric goes into the pocketing of these pants, and the pants are a military-style cut. We used deadstock military fabric that we found. We bought maybe 7 or 800 yards of it, and we're turning it into these pants and some other chino fits. In additon to that, we also did a board short that was made out of military flight-jacket nylon, so more deadstock fabric.

So there was a whole kit, a whole collection. We called it Trail One. As you get better, you can build more stuff like that. It's nice for a retailer because they can showcase it all out. It all goes together. It has a story. It's a capsule, but that kind of bleeds into everything that season. There's one look that goes with that, but then the core will get little pieces of that coming over into it.

You were telling me earlier that you and Andrew have been all over the world surfing: Australia, Indonesia. It's interesting that even with Freenote getting bigger, you still find time to do it.

It's in our DNA and it drives our wives crazy. Dawn patrol surf ... that's how I start some mornings. We get up early, we go surf, the sun will be fucking phenomenal over there. This whole part of this coastline is some of the best surf in southern California, arguably the best. At night you can basically set up on the beach, you can burn wood, you have your bonfires. 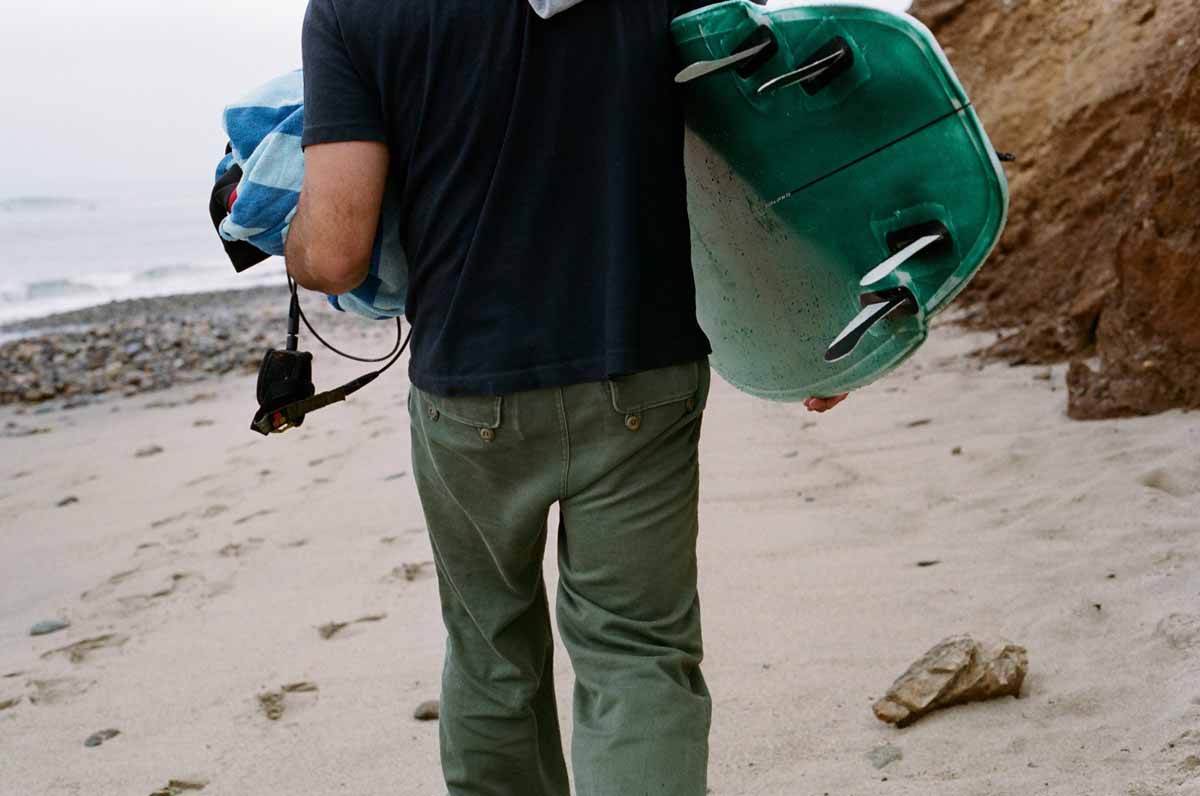 We just try to make what we at least see ourselves wearing. You walk to the beach, with your boots or flip flops on or whatever. You got a nice pair of raw denim broken in. They actually feel really good when you get out of the water and put them on. It just works, and a great button-up that feels good on your skin, around a picturesque campfire. All those feelings come out in the brand. That's the SoCal thing. 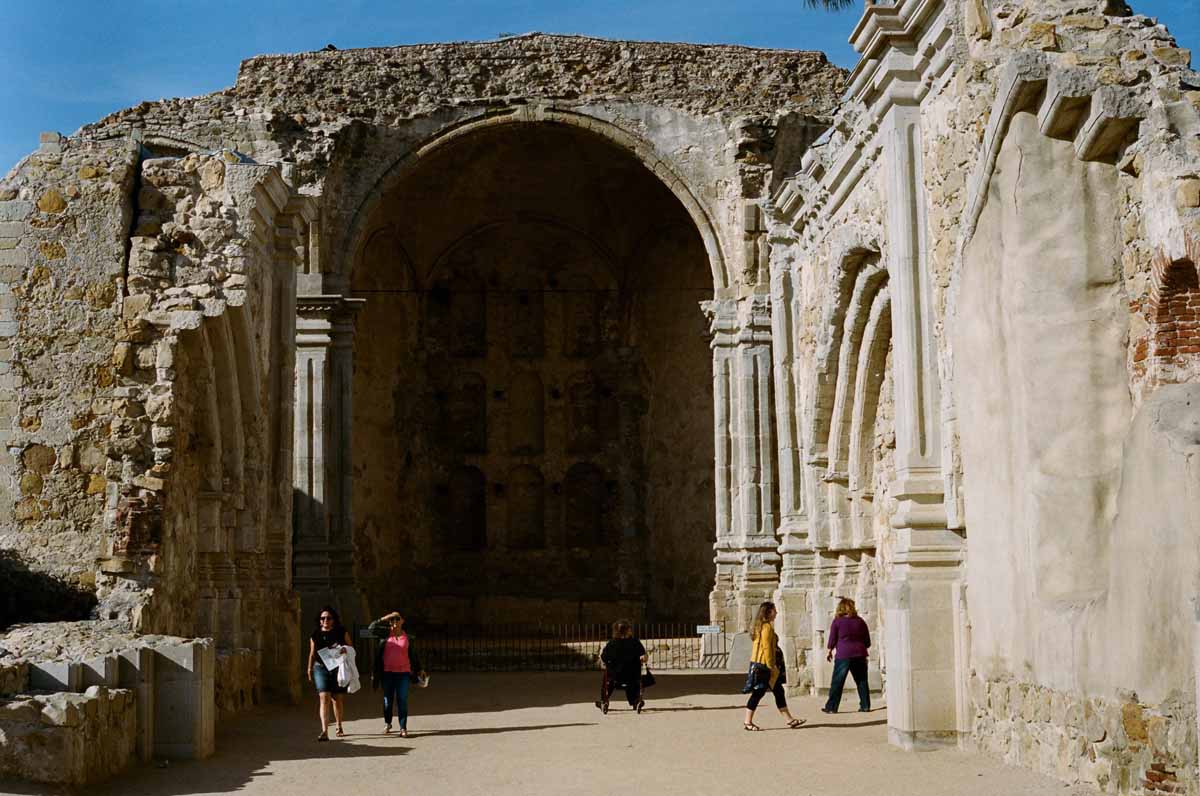 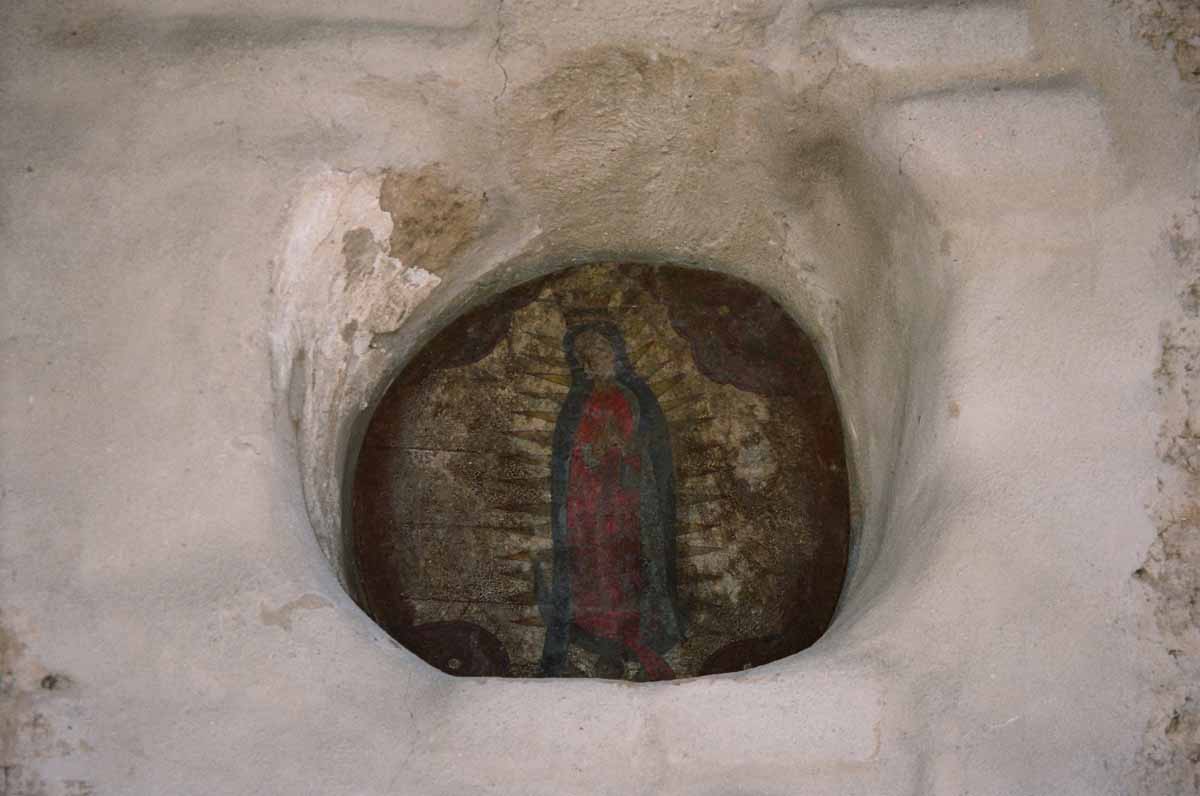 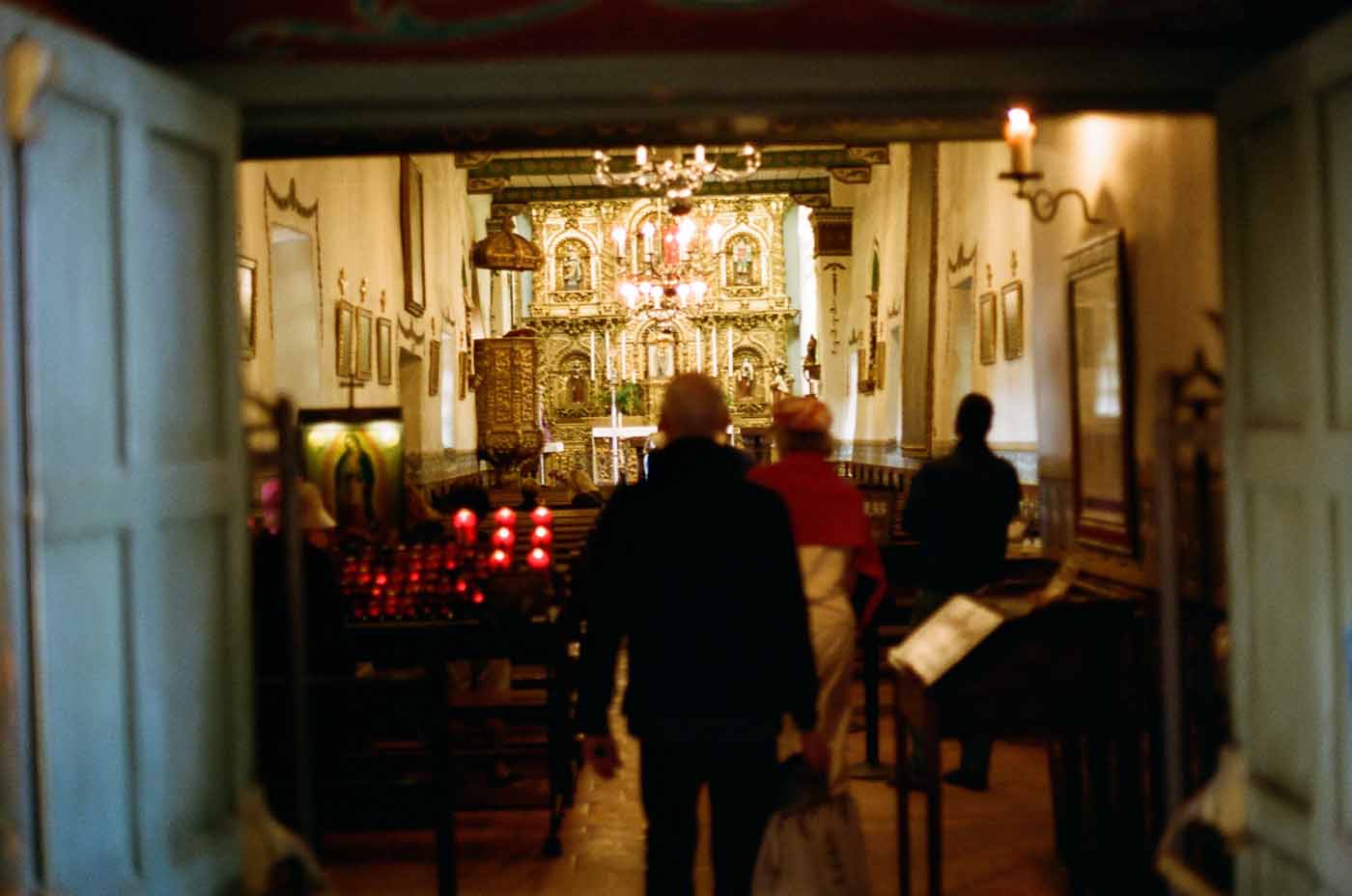 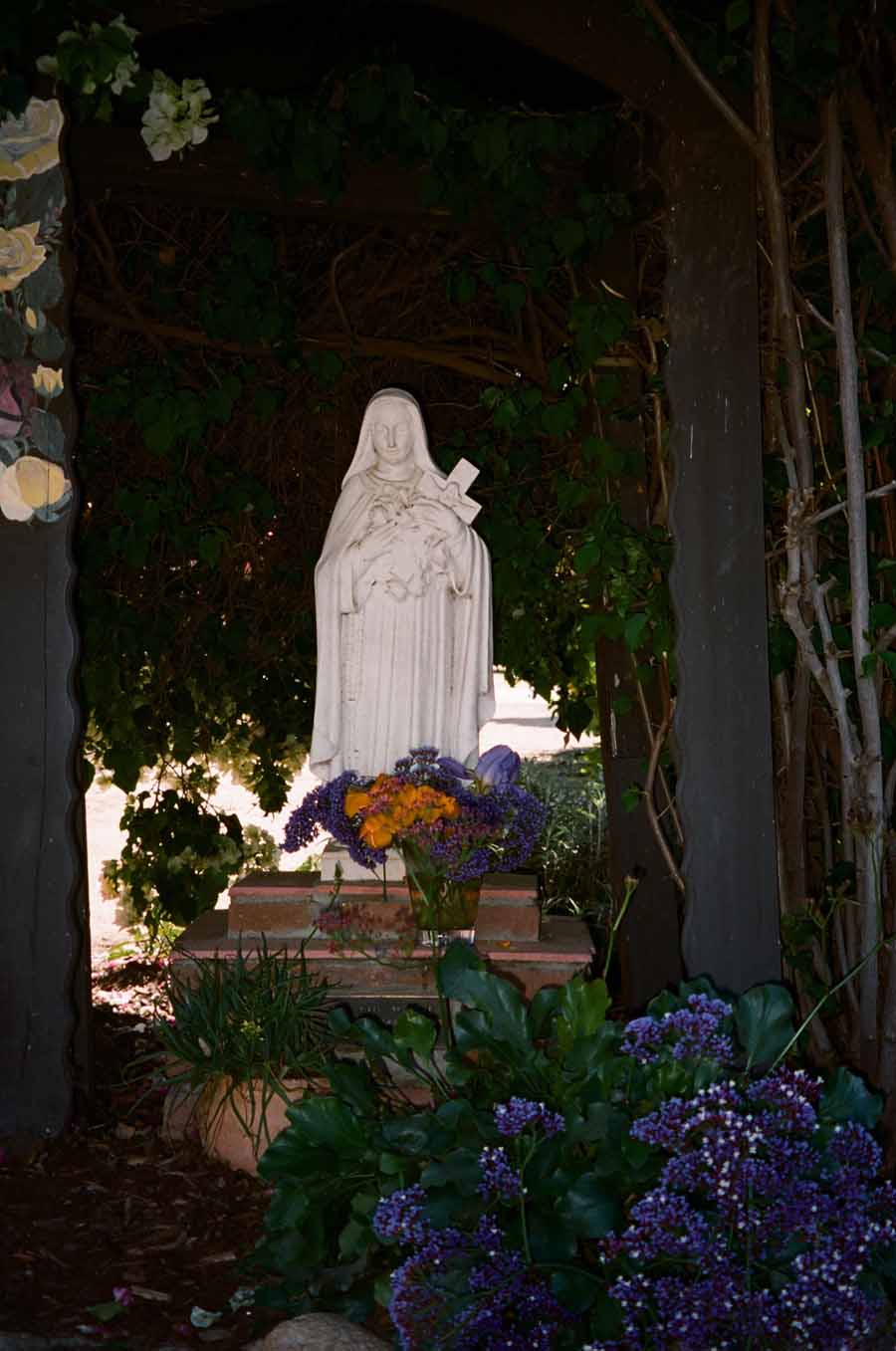 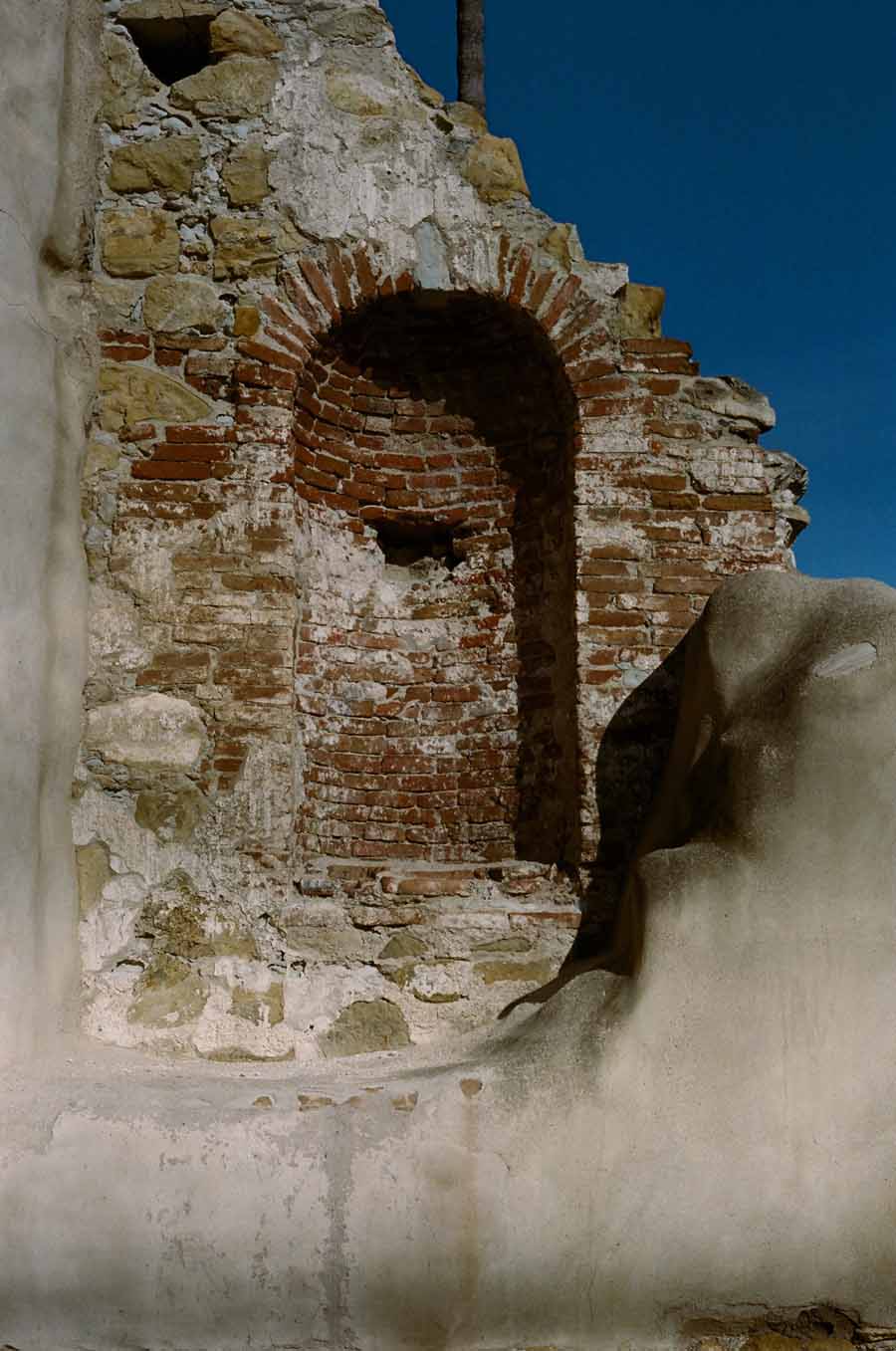 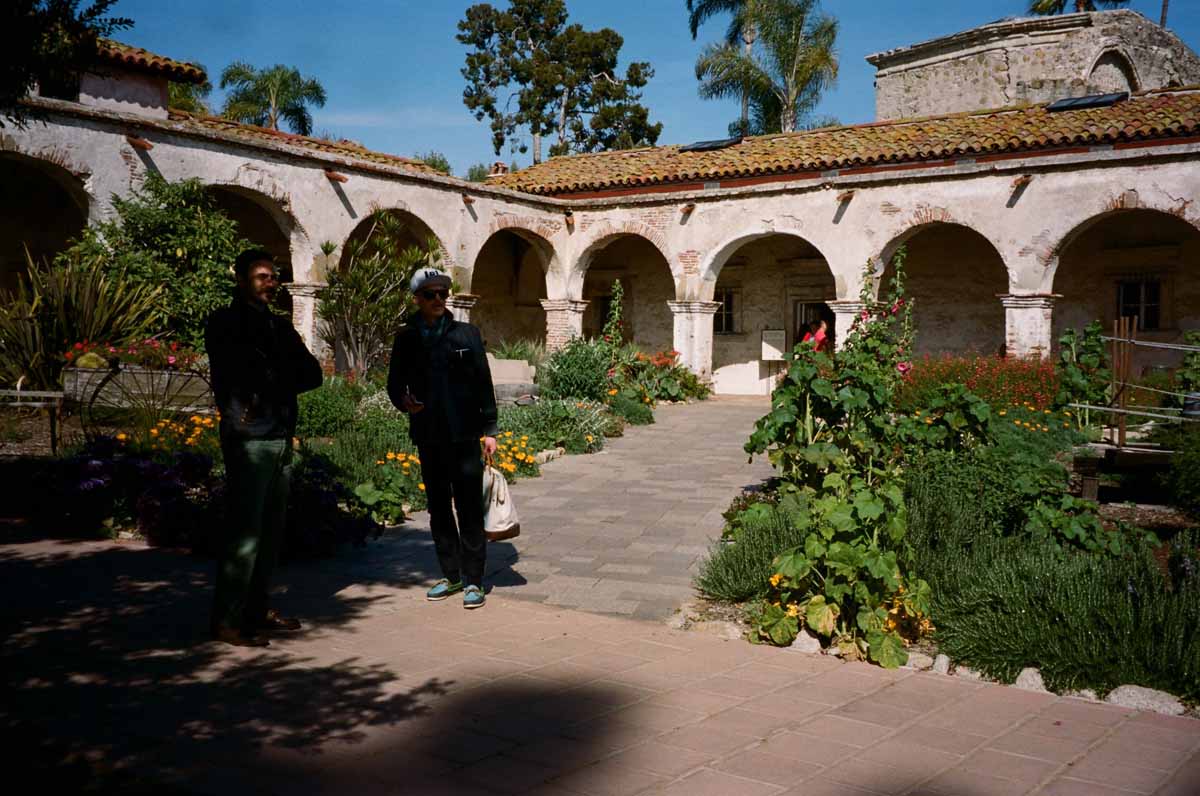 Even for this story, Los Angeles proves irresistible.

Matt and Andrew are doing a one-month residency at the Liberty Fairs storefront in Beverly Hills. On Sunday we drive up with Matt to meet Andrew, who has been manning the shop while we were in San Juan. We spend the afternoon bullshitting and then our hosts treat us to an incredible sushi meal up the street.

After that, Will and I check into the cheapest motel we can find near LAX. It's a Travelodge. We sleep in our clothes. The bedspread and curtains are not stained as much as they are scabbed. With no black light necessary to detect the surplus of biological materials left in this place, I am suddenly aware that "patina" is not always a good thing. I pull down my bedspread, avoiding the crusts of unknown fluids. Rolling onto the mattress, I pull the collar of my chef jacket up over my neck to avoid contact with the sheets. A variety of noises come from the parking lot, some of them routine, some disconcerting.

I wish to God we were back in Capistrano.