"Energy Can't Be Destroyed": The Remixed Streetwear of Justin Mensinger 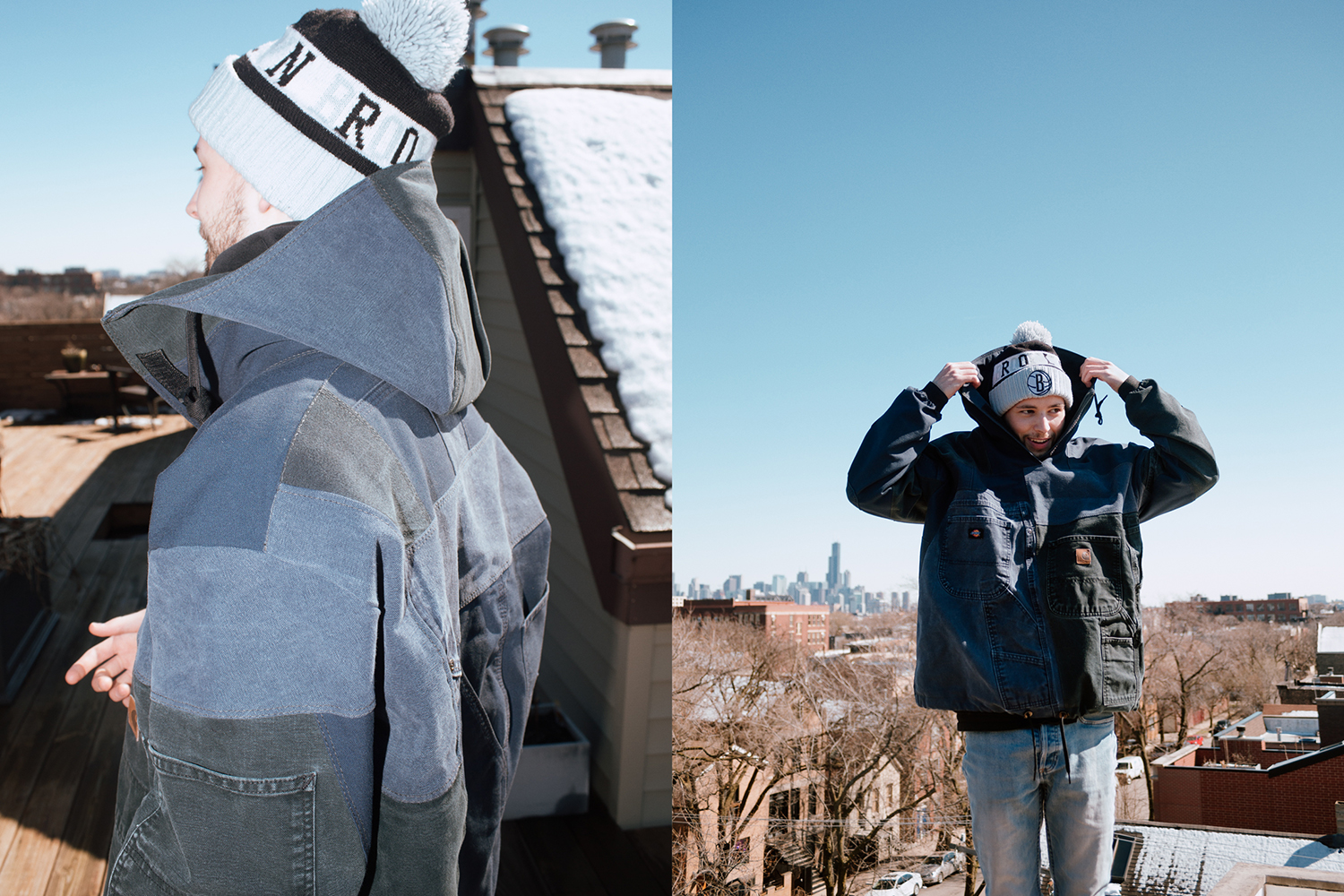 As soon as I got to Chicago, my friend told me that (the streetwear boutique) RSVP had posted for interns, so I worked there. It opened my mind to cut and sew. You can sell a flannel shirt for 800 dollars if there's enough work in it. I didn't appreciate that before. On the sneaker side of things, everything was all artificial value and hype, but then when I saw the clothes, I realized that there was so much work put into them that it's not hype. It's actual value.

I'm kind of obsessed with this idea of presence. I've always wondered if clothing can take on the energy that goes into making it, and then reflect that energy back.

You can see the lazy energy in the brands just making product to make product. (At RSVP), you could tell why certain brands weren't selling. There was no energy or thought put into the product, even if it was really good quality, made in an atelier in Italy or something. It had no life, but then when I started seeing brands like Readymade from Japan, you could tell that there was life put into it. It had a story and a history, but then you would see an Off-White bag that was the same type of bag, but it just looked like it came off an assembly line. It had no life to it at all.

If sampling is the first level of hip hop aesthetics, how the pieces or elements fit together constitute the second level.
— Richard Schur, "Hip Hop Aesthetics and Contemporary African American Literature"

"Upcycling," "reuse," and "sustainable" only indicate an approach to sourcing. What the designer does with the material is what matters.
―from the Someone Else story on Julia Kordiukova 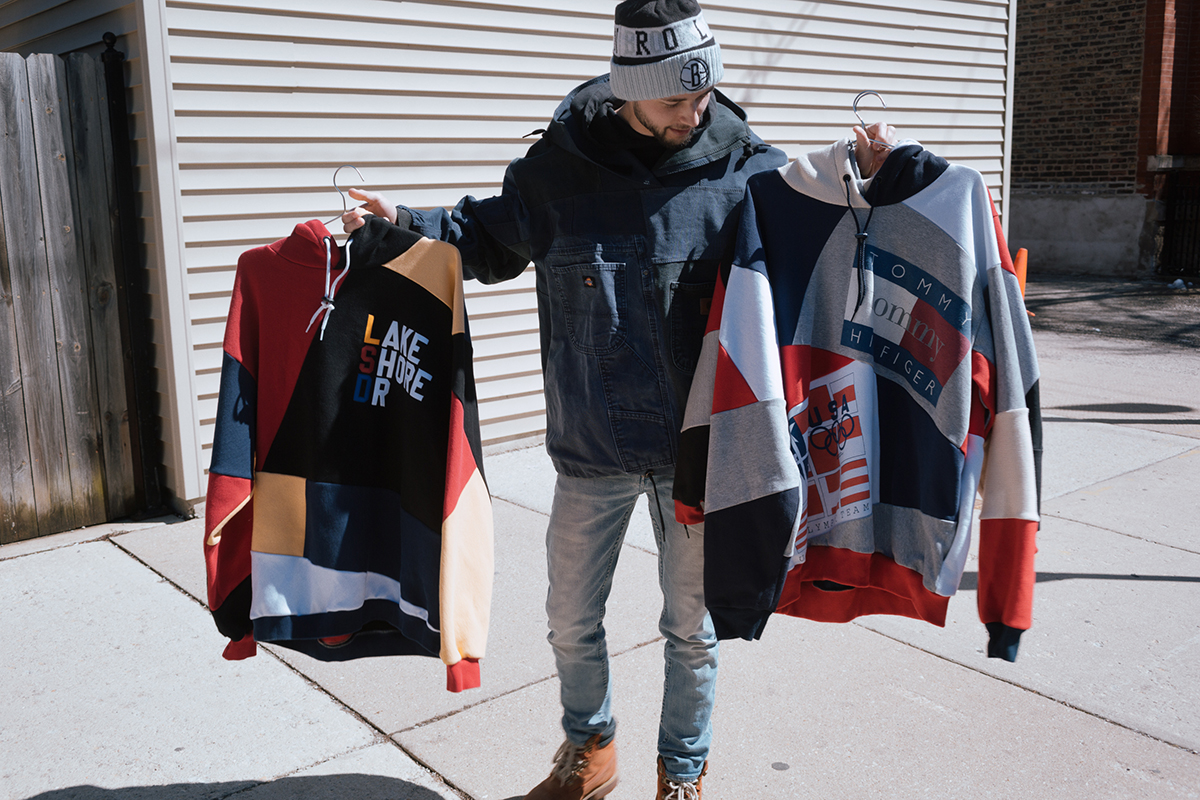 In the Someone Else story on Julia Kordiukova, I described Justin in passing as "streetwear's Kool Herc." I should have compared him to the Bomb Squad; that would have been more accurate. DJ Kool Herc is known as "the godfather of hip-hop." Starting in the early 1970s, he isolated drum breaks from existing songs and then played those breaks on a loop, using copies of the same record on two turntables. This created a sustained beat for breakdancers to dance to―and for MCs to rap over, creating a new form of music. Eighteen years after Kool Herc set the blueprint for rap with his self-described Merry Go Round technique, the Bomb Squad sampled 21 tracks on the Public Enemy anthem "Fight the Power." Most of these samples were less than one second long, but the Bomb Squad looped them, creating a lush but agitated soundscape that invigorated marginalized America and jangled white nerves. Describing production of the track to Keyboard magazine in 1990, Chuck D said:

The song also incorporates three Branford Marsalis saxophone solos, recorded in studio by the Bomb Squad. These solos, along with turntable scratching from DJ Terminator X, are the only original sounds on the track. In an interview with Rolling Stone, Marsalis described the layering of his solos within the context of the larger sample-scape as "a Wall of Sound to accompany a Wall of Sound."

Despite its reliance on existing music, the production on "Fight the Power" is wholly original because of what the Bomb Squad did with their source material.

The Energy of Execution

"We approach every record like it was a painting. Sometimes we have to have a separate sheet just to list the samples for each track."
―Chuck D

"This is my version of paint."
―a caption on Justin's Instagram, describing an image of piles of fabric organized by color 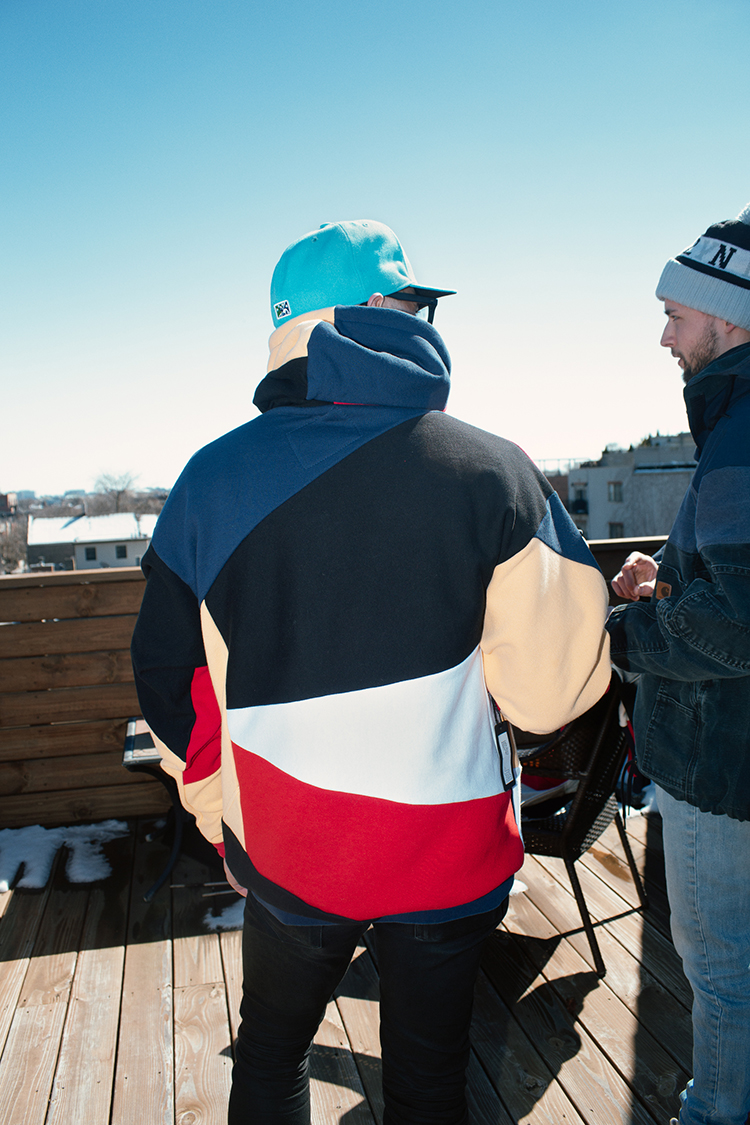 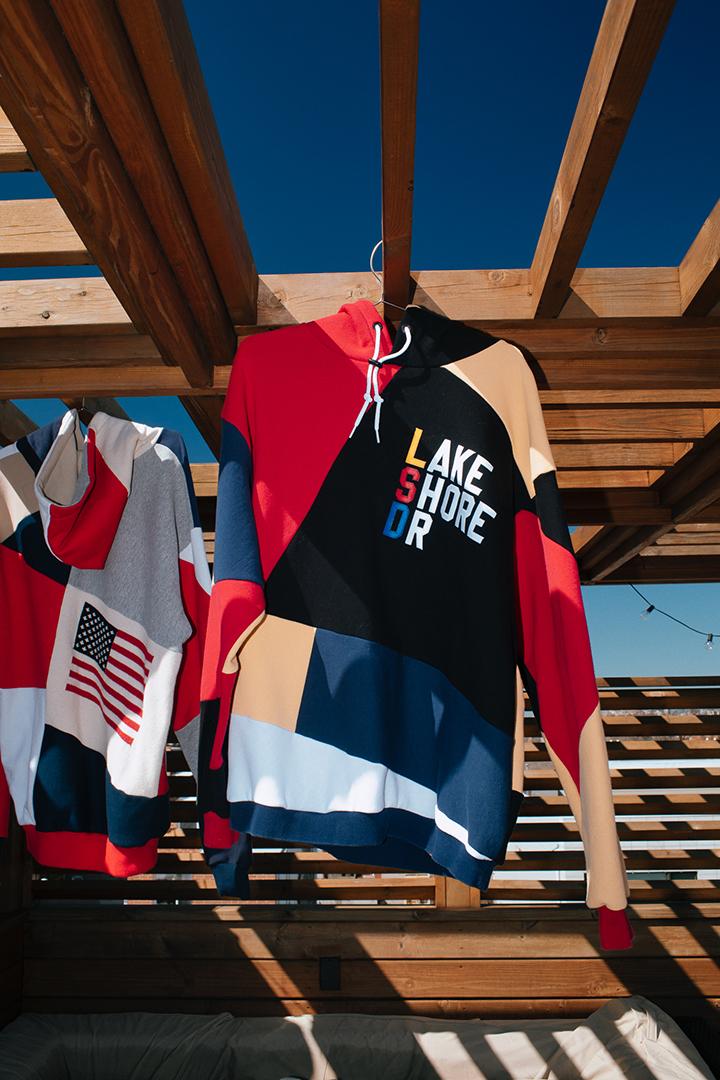 In general, what do you think about reuse? Tons of designers have started using recycled clothing and fabric.

At first, I only saw two brands doing it and you could tell these people knew the garment industry. The one brand, Readymade, had high-quality bags, like higher quality than Louis Vuitton or Gucci. The hardware and construction was all done in Japan on such an articulate level. And I saw Long Journey. Those were the only two brands that I saw when I started making stuff. Now with Instagram, it's like a virus.

I love the example of art or music. You have so many colors and a brush and a blank canvas, and so many people can put different images in there (using the same resources). It’s their voice. The same thing for music. There are only like 12 notes or something, but you can mix them and add your voice and produce millions of songs.

At which point it all becomes a matter of vision.

And how well you execute it.

For his Tommy Olympic Mosaic hoodie, he cut up around five sweatshirts and one sweater into squares, rectangles, triangles, and irregular shapes, and then remixed them into a new garment. He withdrew a similar variety of shapes from two vintage Gibraud tracksuits, resulting in a mini-capsule of four sweatshirts. Justin has turned denim into accessories including duffles, cross-body bags, and backpacks. His Illinois / New York sweatshorts came from around 10 different sweatshirts. Each garment takes up to 14 hours of work, not including the time Justin spends sourcing material.

On the street, the original Tommy sweatshirts and Gibraud track suits would be unremarkable, just a few more literalist 1990s revival pieces. But you could spot Justin's remixed Olympic mosaic a block away, from the back, without seeing any of the front logos. The same goes for all of Justin's sweatshirts. His geometry serves as his own distinct, immediately recognizable design signature. He turns the same-old, same-old into the never-seen-before.

A Stickiness in the Mind

We played samples like a drum. We were piecing together a quilt of noise.
―Chuck D, re: “Fight the Power” 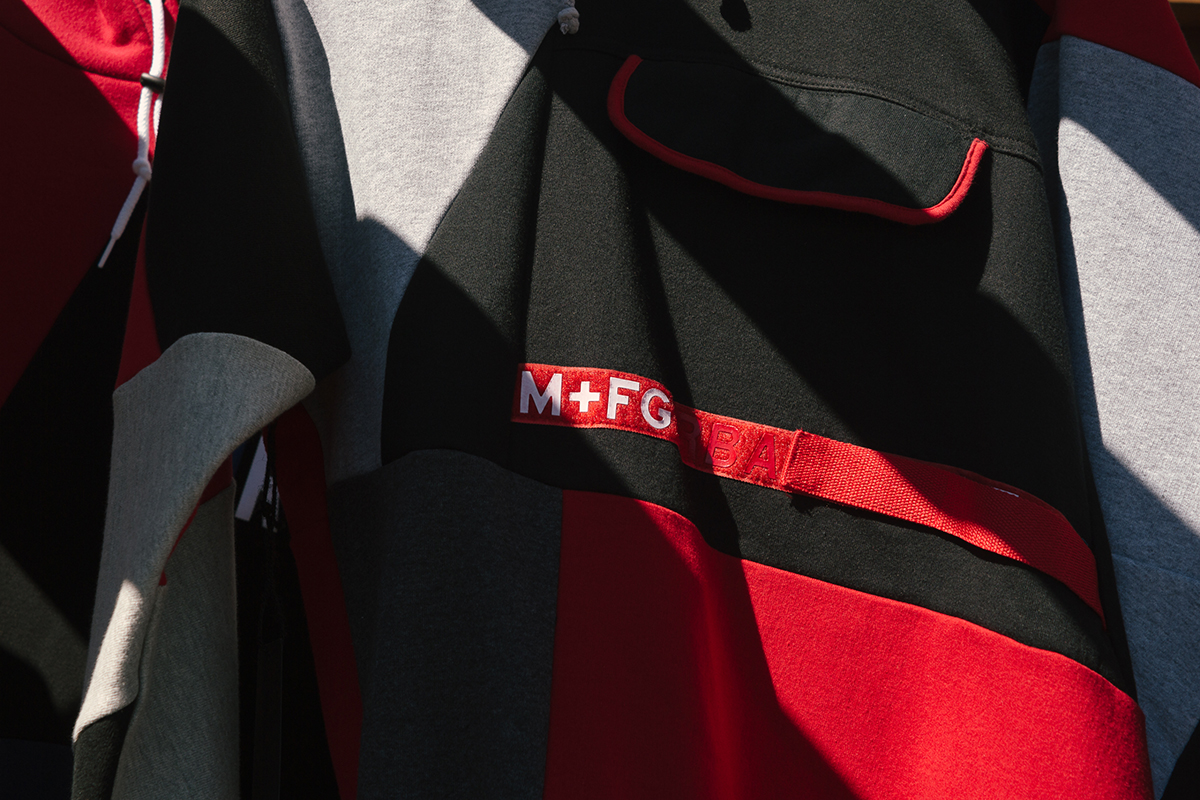 I've known since the beginning with cut and sew what I wanted to do with it. I didn't plan on reusing stuff in the beginning. I feel like this whole time up until now I’ve been reusing pop culture: things like Tommy logos from the nineties or Mickey Mouse. These are all things that are already in people's minds. A lot of brands want to be so different that you can't connect to them. There are certain things, like Mickey Mouse, that people already know. I knew if I articulated from the beginning what I wanted to say, people might not be as receptive to it. But if I took these pop culture things, kind of like Andy Warhol did, there's already a stickiness in people's minds for that. These ideas can be cohesive and then I can grow that idea in people's minds.

You've talked about not being satisfied and wanting to take the next step. Is taking the next step a matter of moving past identifiable pop icons?

OK, and when you talk about what you want to say, is it a literal message or a feeling that you're moving toward? If it's literal message, what is it?

It's both. There are certain parts of life that keep dying and regrowing. It has to do with energy. I don't fully understand it. My dog knows how to pee on a tree without anyone teaching him. It's just innate. It's an energy that lasts through time. I’m not sure what it is or what any of it is, but it does seem like certain things just maintain.

On your Instagram, you mentioned that nothing begins or ends ...

Energy can't be created or destroyed, only rearranged.

Cut and Sew -> Look and Feel

They're selling hippie wigs in Woolworth's, man. The greatest decade in the history of mankind is over.
―Danny the drug dealer, in Bruce Robinson's classic movie "Withnail and I"

They're selling Nirvana t-shirts in Urban Outfitters, man. The Smiley Face and "In Utero" angel appear pixel-for-pixel as they did a quarter-century ago. I'm genuinely happy for folks who find inspiration in the 1990s. It's just that, in general, revivalism often feels like naked imitation. It calls to mind syndicated reruns, or a push-play DJ fist-pumping his way through a playlist. At best, Urban Outfitters is a translator. Currently, the Smiley logo appears on a dad hat. When Smiley first appeared in the 1990s, dad hats did not exist as such; they were simply hats. So, maybe the dad-hat application of Smiley bridges a 1990s music vernacular with a more recent normcore vernacular, and maybe that's interesting. But Justin, like the Bomb Squad, is not an imitator or a translator. He is an interpreter. And what his design work is telling us, about the past and our possible futures, is worth listening to. 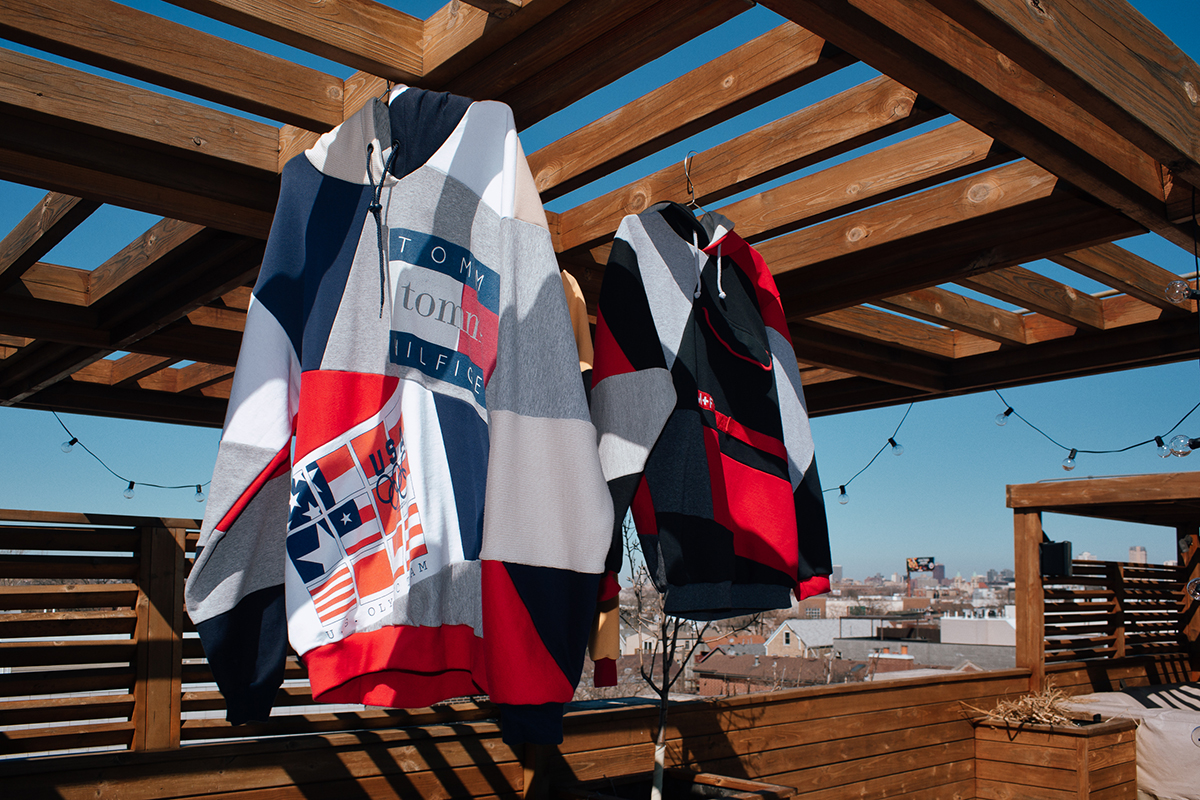 If you’re not placing your energy where you want it to be, it can drive you insane. I’ve had certain jobs where I wasn't learning something, or it wasn't going toward what I’m doing longterm, and it was making me insane. People get stuck in scenarios that drain their energy or give them bad energy. That's one thing that I would like to display in my work: If you master your mind, you can really go anywhere you want. A lot of people avoid what they really want to do because it's so painful. I've wanted to quit at times and I've been frustrated as hell. It sucks when you put all this time into something and you don't get out what you put in. You just gotta maintain course. You gotta find a way to know that what you're doing is worth it. That's the only way things are going to get better. I feel like that's what we are all dealing with that no one wants to talk about.

As we've been talking, the thing that's been going through my mind is sacred geometry. Geometric shapes make sense to you on a fundamental level, the way that your dog knows naturally how to piss on a tree. There seems to be some kind of innate resonance for you with geometry.

Everything is correlated. I think there's geometry in everything, and numbers in everything. There's just something about numbers and shapes that tie in together that explain the universe. I don't know if that's an absolute.

I feel like there are multiple ways to articulate a feeling, and some things don't need to be said. Words don't cover everything. You can look at something and feel something. 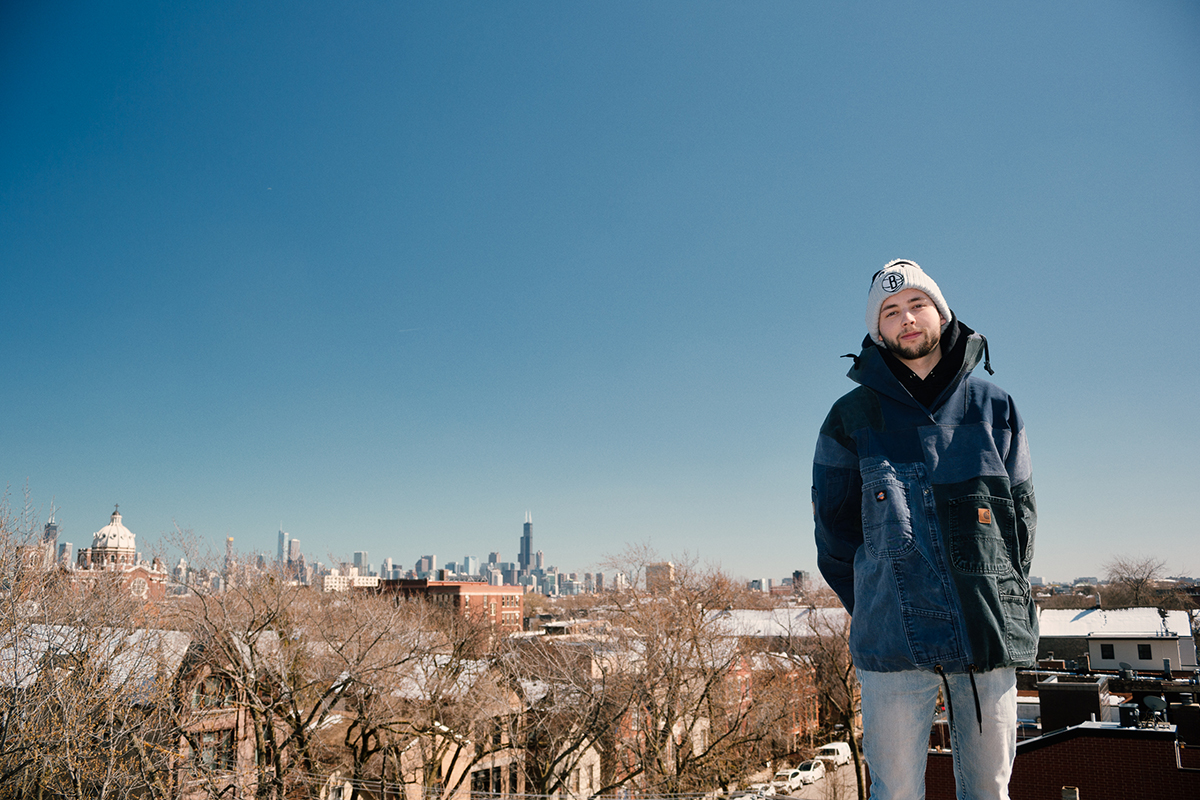